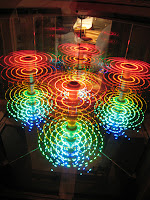 Remember Sonoluce, with the spinning lights dancing to music? Through a chain of associations, it occurred to me that if I added a theremin to the input of Sonoluce, then visitors could control the light patterns directly by moving their bodies.

In case you’re not acquainted with the theremin, it’s a musical instrument that was invented by a Russian, Leon Theremin, in the 1920s. It’s played by spatial movements of the hands; the left hand controlling loudness and the right hand controlling pitch. The first models were made with vacuum tubes, since that’s all that was available during that distant dawn of electronic technology. Note that vintage vacuum tube theremins are now valuable collector’s items, and some people go to great lengths, even today, to create replicas of the originals. They produce a beautiful tone quality that modern theremins are hard put to emulate.

I toyed with the idea of building a vacuum tube replica of the original theremin, but decided that the time it would take to build one, plus its maintenance demands, would make the project impractical. So I bought a kit theremin, designed by Bob Moog, the inventor of the Moog Synthesizer. It works very well and produces quite a satisfactory tone quality. . . and it only took a couple days to assemble.

Currently I’m building a junction box for the theremin that includes a headphone and speaker amplifier, since this model does not include one. The instrument will be mounted on a swinging arm near Sonoluce, so it can be used either in conjunction with that exhibit, or swung out of the way and used on its own. The junction box/amplifier is still in progress, but should be done before long. We’ll post a note here to let you know when everything is together and working.

In other exhibit news, visitors have been asking the whereabouts of Rhythmo. She’s been off the floor some time for a revamp. We’d been having trouble with the turntable sticking, due to warping of the masonite from which it’s fabricated. Also, the plating was wearing off the magnets, graying the scale markings and making them difficult to read. We’ve replaced the masonite with an aluminum disk, which Bill Lee has painstakingly drilled and re-fitted to the bicycle hub that serves as a bearing. We’re hoping to have that project finished in the next couple weeks. We’ll let you know when  it’s ready again for public view.